Tempeh is one of my favorite foods. It’s texture is second to none. The nutty flavor is unparalleled. It’s a dream to work with in the kitchen and on the grill. That’s why it is the perfect accessory to buffalo hot sauce.

I like to cut and steam my tempeh to prepare it for the marinade. It opens the pores of the fermented soybean cake and allows the flavor to seep in. Once I’ve steamed it and dumped on the marinade, it is ready for the hot grill where it only needs a couple of minutes per side.

Buffalo sauce is easy to make. All you need is your favorite hot sauce (I dig Frank’s Original) and vegan butter (Miyoko’s is the best vegan butter on the market). I add a dash or two of garlic powder and pepper to the pot while heating. Enjoy!

We’re baaaacccccccck!!! That’s right, your favorite tailgate blog is back online with a little something special to get you excited for the 2019 football season. This year will be the biggest season EVER in the Muni Lot. You don’t want to miss a single tailgate.

To get you hype, check out this tailgate season preview video. It features a little sample of the tailgate wares we’re gonna be cooking up this season!

Big thanks to Scott Esterly of Esterly Photography for the video. This is his first crack at food videography so except some big things from him! Also thanks to the GreenRoom for a fabulous venue. I can’t say enough about Scott or the GreenRoom team. I highly recommend them for your photography, video or event space needs.

See you on September 8th!

With the 2017 Super Bowl upon us, here is a great finger food recipe that will wow the party. I grew up with lox and cream cheese brunches. While I never could get into eating smoked salmon, this carrot version is arguable better tasting and certainly more healthy. Enjoy!

They said it couldn’t be done. No, not the Browns winning their 2nd to last game of the year, avoiding an abysmal 0-16 season. They said making hand-dipped corn dogs at the tailgate with only a grill was next to impossible. I’m here to say it is not. Quite the opposite, this recipe is simple and can be replicated anywhere.

What you’ll need is a couple packs of Field Roast Frankfurters (no other brand will do), some bamboo sticks, non-stick foil and the prepared cornmeal batter from below. Put the dogs on a stick and grill. Then dip in the batter and wrap carefully, tight around the ends but loose in the middle to allow for expansion. Be generous when dipping and coat the entirety of the dog. Watch in amazement as you unwrap the foil to a perfectly encrusted corn dog. No deep frying required! Enjoy!

Hey everyone! Welcome to the fresh new redesign of my website. It will make things easier to share recipes with you and bring the vegan tailgate to hungry fans around the world. Stay tuned for more changes!

Early season tailgates are the best. The shores of Lake Erie delivered another perfect fall day. Hold the Pigskin hosted another big crowd including the one who penned the name of the blog, Nick Harper. Nick loves him buffalo flavored anything, so I figured it was time to recreate an American classic: buffalo chicken dip.

There is nothing healthy about this dip, which is probably why it tastes so good. Vegan cream cheese, sour cream and cheese. Two packages of shredded Beyond Meat chicken strips. An entire bottle of Frank’s Red Hot. My mouth just starts salivating recapping those ingredients.

The Beyond Chicken makes this dish special. The self-
proclaimed “future of protein,” now has a roster of sports stars endorsing their product. Made with non-gmo soy and pea protein, the chicken also has some great flavor and shreds perfectly. Do not use another brand when making this dish!

One final tip before I get into the recipe. Invest in a cast iron pot so you can make this dish on the grill. The unvieling off the grill will draw ooh’s and ah’s from the crowd.  Enjoy!

And we’re back! A long offseason punctuated by a perfect fall day, a new tailgate van and a full menu

of vegan fare. A tailgate breakfast can be a welcome treat and a life saver. Often when making a big meal it can be hours before you eat and no one wants to snack on chips and salsa for breakfast. So that’s why I love to incorporate a grilled breakfast item at the tailgate.

Last year Broccoli Rob made vegan break burritos ahead of time, wrapped them in foil and then tossed them on the hot grill first thing in the morning.  They were excellent! That got me thinking about other breakfast items we could make and naturally I landed on the Egg McMuffin.

This recipe combines the best of all worlds: marinated tofu, vegan sausage breakfast patties (there are countless brands to choose from), vegan cheese, whole wheat English muffins and a special blend of sauces. After you eat this sandwich you will ask yourself, “why can’t I eat this every day?” Enjoy!

Cleveland, OH – With the goal to “honor tradition and provide modern edge,” the vegan tailgate blog HoldThePigskin.com revealed a new logo today on the eve of training camp 2015.

The likeness of Brownie, the famed elf, is mashed with Popeye the Sailor Man, the spinach guzzling cartoon whose physical strength immediately becomes superhuman upon eating leafy greens.

While the website didn’t undergo an expansive (and expensive) “two-year revamping project,” the new logo drew rave reviews from fans of the site.

“That logo is AMAZING!” said Nick Harper of Columbus, Ohio. Mr. Harper also happens to be the creative brain trust behind the name “Hold the Pigskin.”

“That is the coolest thing I’ve ever seen! When can I make it my background?” chimed Chris Sheeks, a game-day regular.

Requests have poured in for t-shirts, aprons and other memorabilia with the new logo and should be coming soon. Those who want merchandise should fill out this form to be included in the first batch.

Other intricate details of the logo, drawn by Cleveland artist and designer Shawn T. Gray, include a carrot football with green leaves protruding from the bottom of the “carrot skin” and a flaming grill to symbolize the epic tailgates.

Unfortunately, this logo rollout didn’t come with huge party at the convention center or utilize focus groups and surveys, but the impact on the brand is unmistakable. “This is a total game-changer,” said website operator and head chef Adam Rosen. “Hold The Pigskin is now firmly on the map as a vegan destination event for plant-based tailgaters around the world.”

The vegan tailgate season opens Sunday, September 20th in the Muni Lot when the Browns take on the Tennessee Titans. Expect some other exciting additions to the tailgate this year in addition to the new logo. Stay tuned! #btlerie 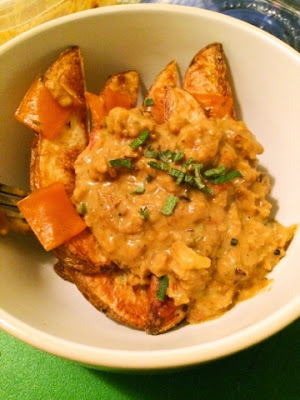 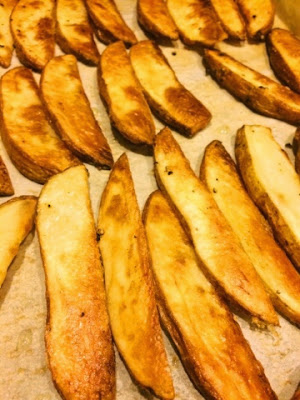 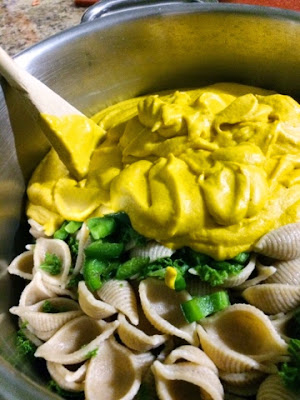 The football offseason is officially upon us but that doesn’t mean we should stop making epic foods! I understand many people, including myself, are crunched for time after work. Easy and delicious recipes are tough to come by, especially those with a wow factor.

This recipe comes together in about 30 minutes and will blow you away with how good it is.  Here is where it definitely pays to have a Vitamix or else you’ll need to soak the nuts and work at it in a regular blender. Pair this with some bbq seitan cutlets (that I like to keep in the freezer) and a steamed veggie side. While similar to past mac and cheese dishes found on this website (Tailgate Mac and Cheese and Chili Mac and Cheese), this version is much simpler without losing any of that creamy delicious flavor.
If you don’t have sunflower or sesame seeds feel free to use all cashews. If you a nut allergy, use all seeds. Gluten intolerance? Use your favorite gluten free pasta as this sauce is naturally gluten (and soy) free. You can make everyone happy this week for dinner, enjoy!
Prep 10 mins ∙ Cook 20 mins ∙ Makes 8 servings

1. Toss the sweet potato, carrots, onion and garlic in a small pot and barely cover with the water or broth. Bring to a boil and simmer 10 minuted or until soft.
2. Meanwhile, boil a large pot of water and cook the pasta according to the directions. I like to add a large handful of greens during the last 5 minutes of cooking to make it more healthy!
3. In a vitamix (if not using a high speed blender, please soak your seeds/nuts accordingly) add the cashews, sunflower seeds, sesame seeds, spices and the contents of the veggie pot, including water or broth. Blend until creamy.
4. Mix together the cheesey sauce and drained pasta. Toss the jalapeño if you want so kick or serve with your favorite hot sauce. 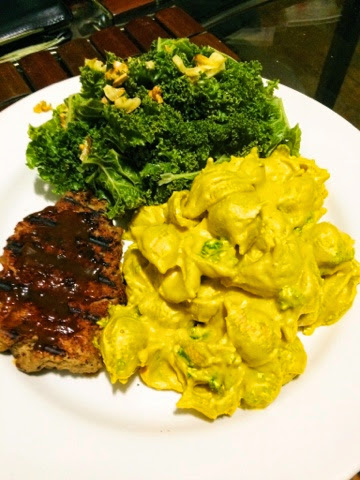